To install the Windows driver:

Leave your Colossus plugged into your PC. Follow the following steps:

Note: the Media Center support for HD PVR is for Windows 7 only.

Make sure "Use internal blaster" is selected

This program configures the IR blaster for use with the WinTV application. Included is the selection of the set top box and the learn mode.

Remote control applet for use with WinTV 7. After you run this applet, an icon will appear in your Windows device tray showing that the Hauppauge remote control is active.

What Operating Systems are supported by Colossus?

Do I need a PC to use Colossus?

Yes, a PC is required to use Colossus. Colossus is an internal full height PCI Express board which will work in x1 slots. The PC is used to both run the Colossus application plus is the place where Colossus recordings are stored.

Can I record video from a composite video source?

Can I use Colossus with a Mac?

There is currently no support for Colossus on a Mac.

When you playback an Colossus recording on your PC screen, you need a fast CPU and at least 256MB of graphics memory.

Graphics with 256MB memory (or greater)

Can I use the Colossus with Microsoft's Windows Media Center application?

Can I use the Colossus with Linux?

At this time, there is no Linux support for Colossus.

Can I record high definition TV from a Cable TV or Satellite box?

What type of recordings can I make with the Colossus?

Colossus encodes in real time directly to the hard disk in an H.264 format with AC-3 audio.

There are three formats which you can choose when recording a video:

.TS which is a generic 'transport stream' compatible with many digital media players

.M2TS which is compatible with the Sony Playstation3

.MP4 which is compatible with the XBox360

The Colossus files can also be burned onto a standard DVD+R or DVD+RW disk for playback in a Blu-ray disk player using the included Arcsoft application.

Note: Some older models of Blu-ray DVD players cannot play AVCHD files on either DVD-R or DVD+R discs. Check your owner's manual to see if your Blu-ray player is compatible. If it is not, check with the manufacturer to see if a firmware update is available

What type of audio encoding is made with the Colossus?

There are three ways of bringing audio into Colossus: through the stereo audio jacks on the A/V adapter cable, through the HDMI connector or through the optical audio connector on the back panel.

When bringing audio in through the stereo jacks, audio is digitized and then recorded as AC-3.

DTS audio is currently not supported.

Can I output files I’ve recorded with my Colossus or other content from my PC back to an external TV monitor through the component video outputs on the Colossus?

No, the Colossus does not have the ability to play back recorded videos to an external monitor. The component video outputs act as a pass through for live video streaming from your video source through the Colossus back to your TV monitor. Your PC must be turned on and Colossus must be running in order to pass the video through to the external TV.

How can I use my remote control with the Colossus?

Can my PC go into hibernate or sleep mode when using Colossus?

When opening the Arcsoft capture module I only see a Channel button?

If you have a TV tuner card installed the ArcSoft Capture Module may attach to this or any other capture device installed. If you see a Channel button on the Capture Module window go to the Source drop down menu at the top and select the Hauppauge Colossus Capture Device.

Most of the time this is caused by the display adapter, make sure your video card meets the minimum requirements.
Also try updating to the latest drivers supplied by the manufacturer.

Video is jerky or broken up while capturing?

Most of the time this is caused by the display adapter, make sure your video card meets the minimum requirements.
Also try updating to the latest drivers supplied by the manufacturer.

I get a black screen in the capture window when using the component input?

Some set top boxes will disable or turn off the component output if the HDMI or DVI output is being used. Check to see how you have your Television connected to your set top box.

Audio pass through does not work

In order for the audio pass through to operate correctly you need to configure the settings in the ShowBiz application. To do this follow the installation guide to install the Colossus drivers and the ArcSoft ShowBiz software. When finished power on the Colossus and open the ShowBiz software and click on the “record video” Icon, this will open the Capture module. Choose the audio input from the drop down menu ( RCA, SPDIF), once configured the Colossus will retain these settings. Note: the Colossus must be powered on for the pass through to operate.

No, currently none of the VBI is captured in the stream. This feature will be added some time in the future.

What resolutions and bit rates are supported using Colossus?

Record high definition video at up to 1080i resolution, 720p or VGA/D1

Record at datarates from 1Mbs to 20Mbs, constant and Variable Bit Rate

Make Blu-ray format AVCHD recordings, so you can burn your TV recordings onto a standard DVD disk (up to 2 hours of video at 5MBits/sec) and playback on Blu-ray DVD players

What file formats are created by recording with the Colossus?

How much disk space will it take up when recording?

Where can I record the files to using the Colossus and can I use it independently?

The Colossus requires a PC (see minimum system requirements under product specifications) to operate. You may then record to any of the hard disk drives installed or connected to the PC, including external drives.

Can I burn a Blu-ray disk with my Colossus?

No, you cannot burn a Blu-ray disk. However, you can burn a standard DVD that will be Blu-ray compatible (when making AVCHD recordings), and play on a Blu-ray DVD player.

I get a black screen in the Showbiz capture module and no output to my TV when I connect my Xbox 360, PS3 to the Colossus.

Make sure you’re gaming system is not set to 1080p. The Colossus does not understand this format. Please set the output resolution to 1080i or 720p. Please see the appropriate setup instructions for your game console:

If I record my game play can I uploaded it to the internet?

Yes. In the Arcsoft Showbiz application, once you have your completed video file (from the edit section) ready for upload, simply go to the ‘Produce’ section and choose “Upload to Youtube”. The software will automatically create the .MP4 file compatible for Youtube content and prompt you a screen to access your Youtube account, ready for upload.

Can I see a video clip recorded from Colossus?

If you have an H.264 decoder on your PC or Mac, here is a little video clip (15 seconds) which shows a recording made from a cable TV box through the component video connections. It was recorded using the Arcsoft ShowBiz application at 8Mbit/sec.

Can I push video encoded with Colossus or HD PVR through VLC?

If you are a developer, you can bring H.264 encoded video in from either Colossus or HD PVR into VLC so it can be streamed out from your PC. Microsoft provides a sample network transmit/receive filter set in their DirectX SDK.
Here is the way this works:
The HDPVR encoder filter produces transport packets. If you (the developer) create a small 'network push' filter that can receive the transport packets in the directshow graph, then forward them to a udp network address and port (for example udp://192.168.1.1:1234), then VLC is capable of receiving and rendering them.
Start VLC from the command line with: vlc udp://192.168.1.1:1234

No audio is detected when editing Colossus recordings in Sony Vegas

Sony Vegas does not detect non-AC-3 audio in .TS or .M2TS files. When recording videos in the Arcsoft Capture module, make sure AC-3 is selected under Format settings. If using Colossus with Sony Vegas, you must use either optical audio (Dolby Digital AC3 audio format) or you must record in MP4 format with AC-3 audio.

If you are using an Xbox360 and want to record TS files, you must use either HDMI or optical audio. You can set your Xbox to output Dolby Digital in System settings / Audio settings

If you are using a PS3 and want to record TS files for use in Vegas, you must use Component Video and optical audio. To set your PS3 to optical audio out, in your PS3 go to Settings / Sound settings / Audio output settings. Select Optical digital and Dolby Digital 5.1 Then use an optical audio cable for recording.

When I upload videos to YouTube using Arcsoft Showbiz, I do not get an HD option for playback

In Showbiz you have to set the default resolution used when uploading. This is done by going to Options; Preferences; Other and selecting the desired YouTube resolution. Watch this YouTube video for Xbox setup instructions, or look below for screen shots

Step by step instructions for the Xbox 360

First, turn on your Xbox 360 and navigate to the main menu. 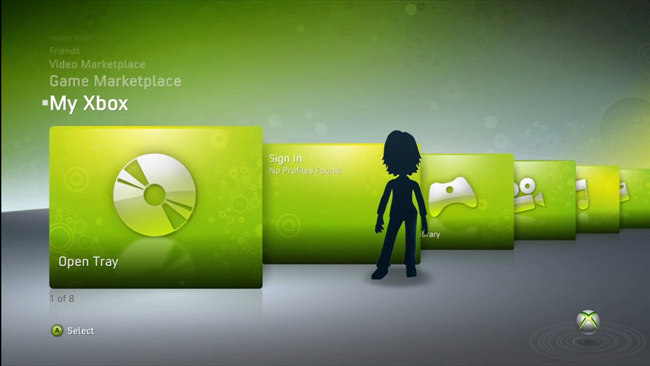 Navigate to the last menu on the right and go into System Settings. 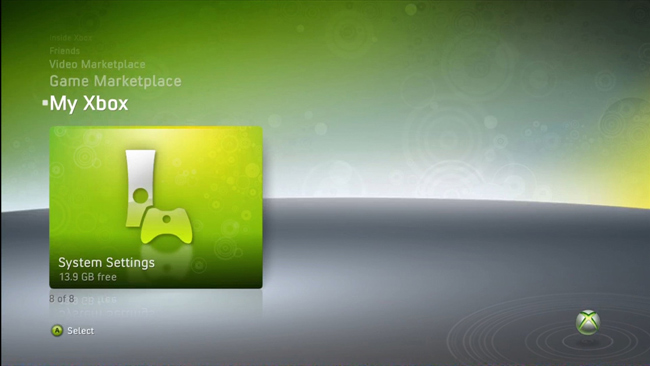 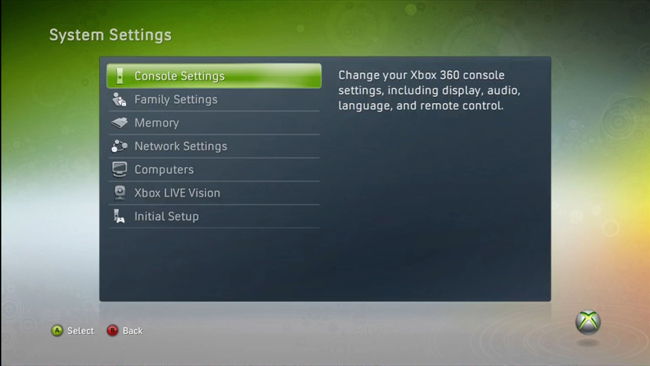 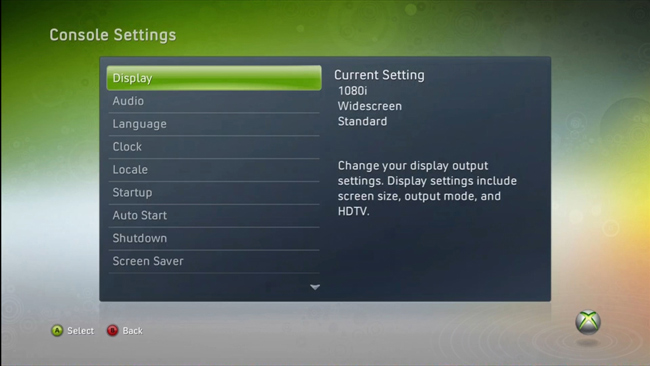 Go into the HDTV Settings. 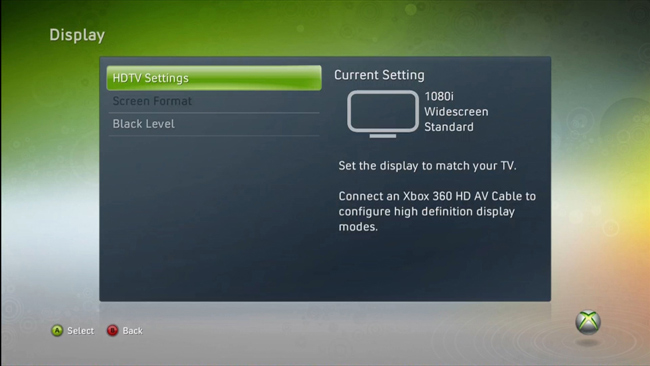 Now select the resolution you want. 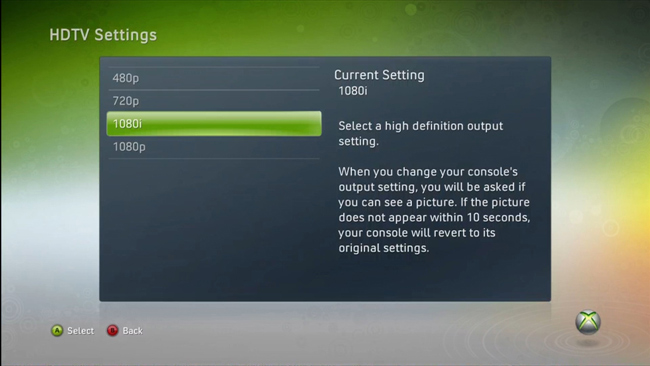 When you select the new resolution, you will be asked if you want to keep the new settings. Please select Yes, keep these settings.

You are now done.

Please turn off on your Xbox 360 and connect it back to your HD PVR or Colossus using component cables.

Note: Before connecting your PS3 to the HD PVR or Colossus, connect it to your HD TV set to make the changes to the PS3 video modes settings. By default, the PS3 will be set to 1080p and HD PVR and Colossus will not work with this resolution. You will need to change your PS3 360 to 480p, 720p, or 1080i. Watch this YouTube video for setup instructions, or look below for screen shots

Before connecting your PS3 to the HD-PV or Colossus R, you must set the proper PS3 video output. These are instructions on how to do this.

First, navigate to the Settings column on the PS3 main screen. 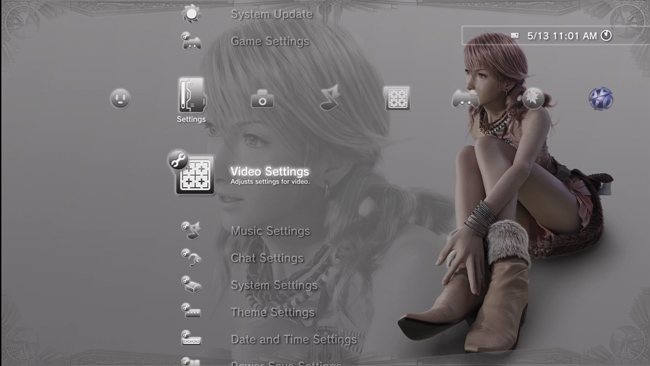 Scroll down to Display Settings 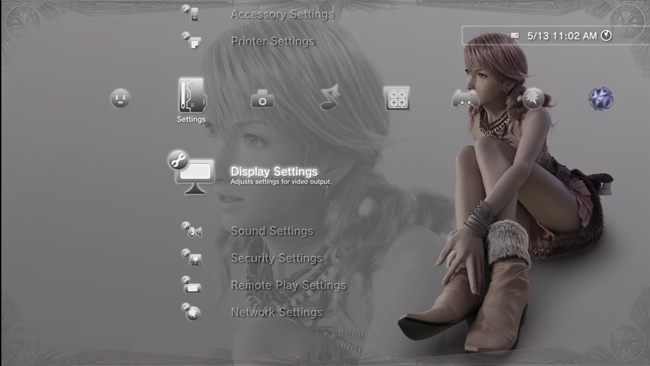 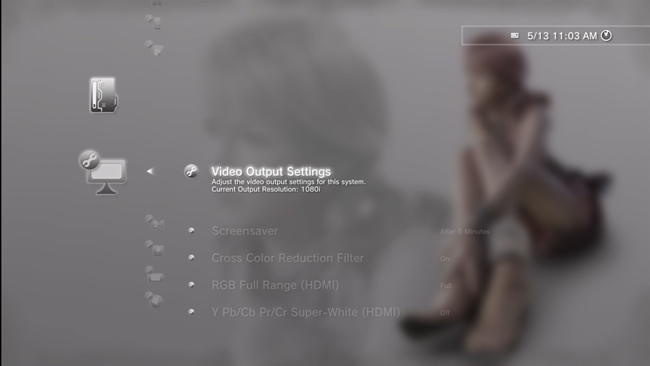 Select Component/D-terminal. You will then be given a confirmation and after proceeding, you need to change your TV to the component video. 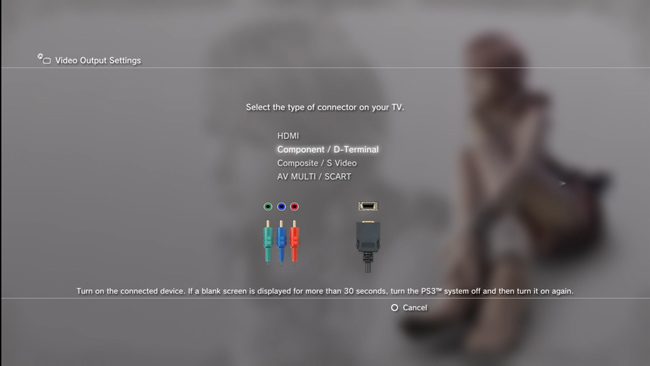 Next you will receive a screen were you will select the desired input resolution.

After selecting 1080i, hit X Enter to go to the next step. 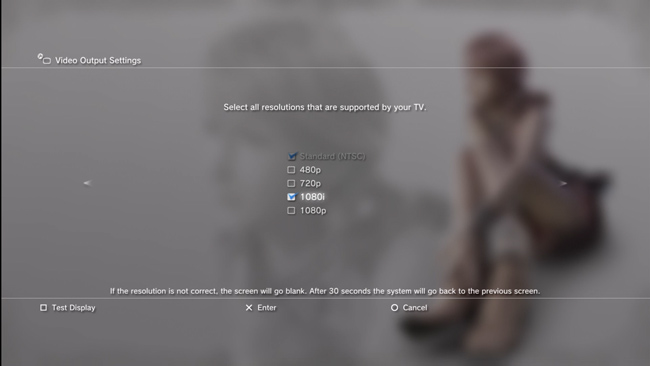 Confirm that you have selected 1080i by clicking X Enter.

Next you will be prompted to set up the Audio Output Settings and then click X Enter. 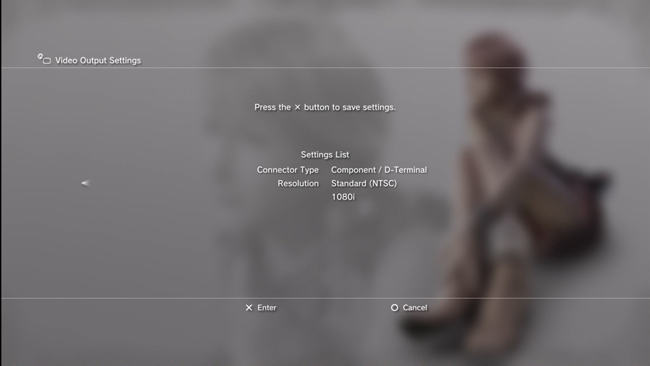 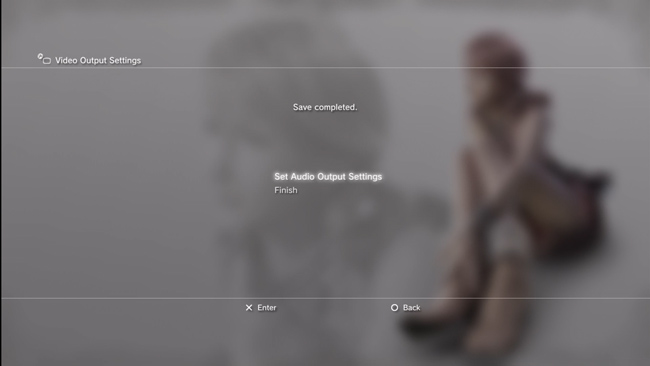 Here you will select either audio input connector or optical digital (cable sold separately). Chose the way audio will be connected to the HD PVR/Colossus. 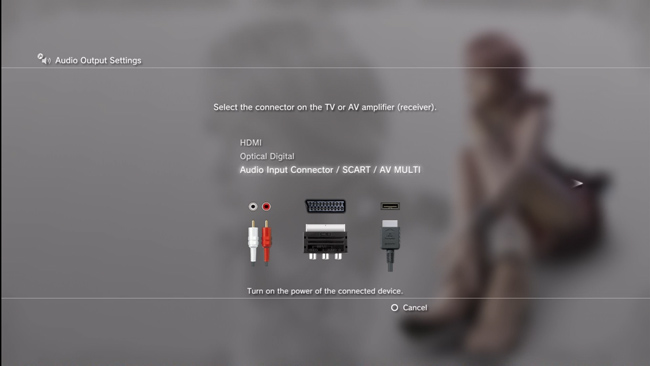 You will be shown the audio settings. Click X Enter to continue. 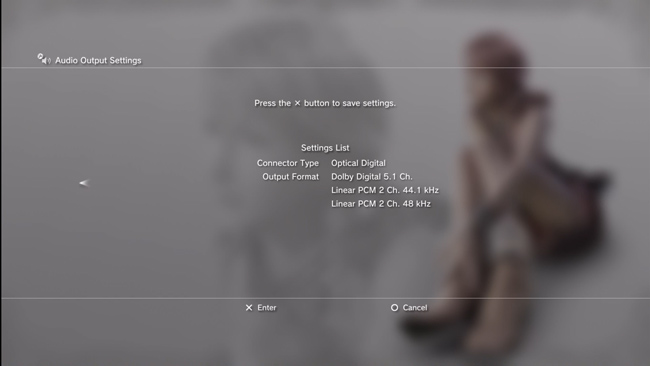 If you select Audio input connector you will be prompted to finalize the setup. 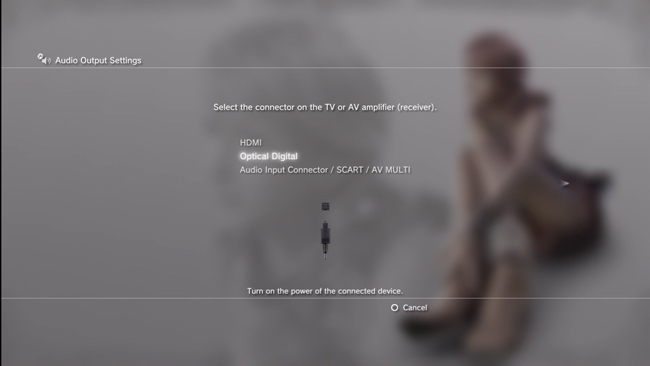 If you have selected optical you must select the compatible formats either PCM 2ch or Dolby 5.1. 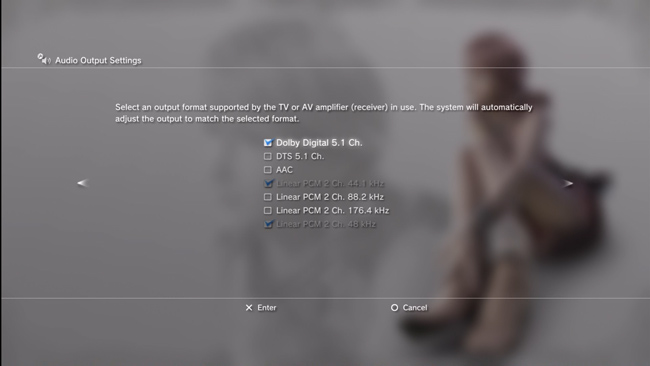 After you confirm your audio settings, you may now power down the PS3 and connect it to your HD PVR / Colossus. 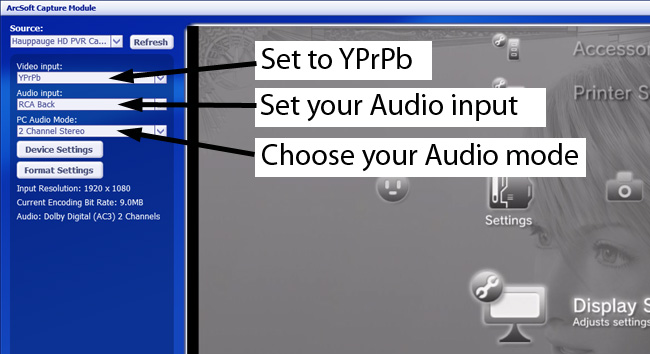 When you open the Arcsoft capture module, select YPrPb for you video input and either RCA back (if you selected  audio input connector) or S/PDIF (if you chose digital optical) for your input audio.

Then capture some high definition video!